The All-New Sorento, revealed on 19 March, is the fourth generation of Kia’s flagship SUV designed and engineered to take on everything life throws at it.

The intuitive, tech-orientated cabin of the Sorento is fitted with premium-quality materials and cutting-edge infotainment, making it one of the highest quality interior spaces found in any Kia to-date. At the same time, the cabin retains the spaciousness and versatility that has characterised the Sorento over its 18-year existence. The attractive, upscale cabin introduces a sophisticated next-generation design, based around twin digital displays in the dashboard. The 12.3-inch digital driver instrument cluster is twinned with a 10.25-inch touchscreen infotainment and navigation system at the centre of the dashboard.

The proportions of the all-new Sorento are subtly adapted to make it appear longer in profile, with shorter front and rear overhangs and a longer wheelbase. Its new proportions also extend the length of the bonnet, drawing the A-pillar 30mm further back from the front axle for a more ‘cabrearward’ design. The trailing edge of the hood wraps around the front wings and turns into a single, strong character line that extends along the side of the Sorento and flows into the new vertical taillights. 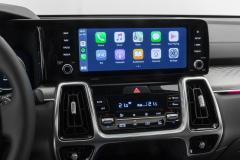 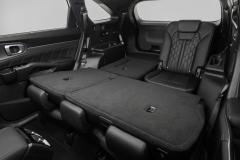 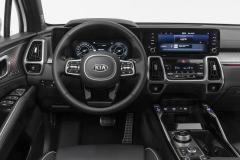 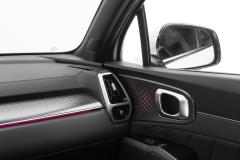 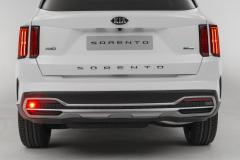 The new model will be available with diesel, hybrid or plug-in hybrid powertrains.

The Sorento hybrid is powered by a new ‘Smartstream’ electrified powertrain, pairing a 1.6-litre T-GDi (turbocharged gasoline direct injection) petrol engine with a 1.49kWh lithium-ion polymer battery pack and 44.2kW electric motor. It produces 230PS and 350Nm torque, and this electrified powertrain combines low CO2 emissions with high levels of performance. Power is sent through the six-speed automatic transmission through a transmission-mounted electrical device, allowing the full power of the engine and motor to be transferred in parallel with minimal loss of energy.

The new four-cylinder 2.2-litre ‘Smartstream’ diesel engine is also available, producing 202PS and 440Nm torque – and is 38.2kg lighter compared to the one found in the third-generation Sorento. It is paired with Kia’s new eight-speed wet dual-clutch transmission (8DCT) and, designed to offer the smooth shifting characteristics of a conventional automatic, the 8DCT enhances fuel efficiency over a conventional eightspeed automatic, depending on application.

UK specification, prices and on-sale date will be announced soon.